You can visit a Test Center in Austria, Serfaus-Fiss-Ladis in Fiss Sports GmBH or in Switzerland / Telemark Lenzerheide – Arosa, or Skipoint in Bratislava, Slovakia.

You can visit us in our home ski area Jasná, Chopok, Slovakia as well.

Do not hesitate to contact us for private individual or group Ski Tests planned to your requirements. 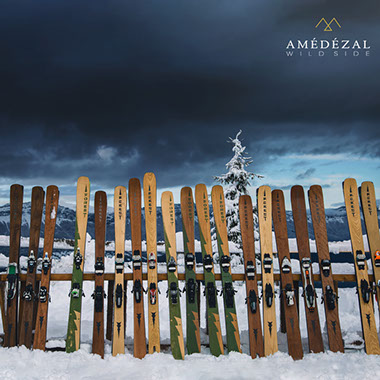 "I tested the Forest Skis Perun in late March in Jasná Ski Center. We rode mostly on firn, only the upper parts of couloirs were harder. The skis seem to have no problem with any terrain, have good grip even at higher speeds. What surprised me, is  their supernatural agility especially at neck breaking downhill couloir endings in Luková. The tip perfectly absorbs even great irregularities like it's "eating" moguls, I've never ridden anything  comparable before. I have to praise the production quality. Broad edges and tough base withstand rock shots without injury. After virtually entire season, the skis looked like they were on snow only for a few times."

"LOTOR / prototype test: I had the opportunity to try two different skis, I felt

a massive difference between the edges...

BC edge - will be certainly appreciated by freeriders riding the woods and places where you need to react quickly and speed is not a priority. Skis are very easy to turn and are rotating at a slightest impulse and go immediately into the arc. That's why

I think that Lotor is also suitable for skiers who are beginning to ride Freeride and do not ride so fast. But I have been more impressed by the BigMountain / FR edge.

I was amazed at how stable can be

a powder ski that does not have even 110 mm under the foot. I jumped a few drops - most could be only about 6-7 meters, and

I landed them without problems and without me having to go through my butt.

I was worried about the width at first, but as soon as I landed, I once again stood firmly on the skis and could continue to ride. I tried to jump doubledrop and I felt very confident in it. Immediately after the first drop I was ready for another without having any trouble with a shaky skis or alike, so the stiffness of the skis is just ideal for me. I also tried the 360  from a rock, two times. I landed well the first and I put a little bit through the back the second one, but I sent it well due to the fact how the ski tails held. I experienced before in similar attempts that I just pushed through many skis so they did not give me a chance to come back up from an impact of a drop. Regarding the turning in the air, skis were behaving comfortably due to their weight, which also surprised me. My weight is about 60kg, so it is sometimes difficult for me to turn Freeride skis in the air, but with the light Forest skis it was quite easy. Plus also the width below the foot is exactly ideal for BC tricks because with wider skis it take too long and not always you can do a nice carving turn before the barrier, used in many tricks (e.g. you can't basically jump a Cork3 without carving an arc), so the width is also a great plus for the tricks. I also tried to ski on switch, but I can imagine to have the skis mounted more to the center and it would be great. I can imagine jumping a BC kicker on LOTOR, because as I said they have exactly perfect specs for this. So for me, it's a super ski,

I enjoyed a lot of fun because all I thought about was skiing, I didn't have to worry about the skis at all."

"I tested the new all-mountain model in Jasná during Upside 2015 (18/04/2015) on hard icy snow. With my height 170 cm, I ride K2 Sidestash 181, so I was initially quite skeptical about these skis with 90 mm under feet. But the opposite proved to be true, as soon as I had the first run. Skis led track well on hard surfaces, they didn’t twist, and even at higher speeds did not tend to vibrate and not "slam” as some skis with rocker use to. Skis are perfectly dampened and stable, playful and can cope with rutted and uneven snow, but still maintain the agility and predictability, react quickly to direction changes, there is no need "to push through”. Unfortunately, conditions did not allow me to try them in deeper snow. They easily mastered carving on the really hard slopes, the arc is initiated easily and quickly with them. They tend to accelerate even more, when in an arc. Among the biggest advantages of these skis can be counted their agility, handling and "fun factor". Due to their relatively low weight, I can imagine them with touring binding, which would create a perfect universal set-up for touring and riding on a variety of terrain and in diverse conditions."